A few days after the death of the famous British singer David Bowie, New York City is back to business! A New York real estate agency, CityRealty, features two apartments for sale at 285 Lafayette Street, the building where David Bowie lived. Built in 1912, this building is located in the heart of SoHo, between Prince Street and Jersey Street. It has 31 apartments and 10 floors. And this property advert has become the most viewed on the real estate network!
The agency states that “celebrities like David Bowie live in the condominium”. Without update, the fact that David Bowie “lives” in this building is also mentioned in the Pros and Cons! A little further, the “status” of David Bowie in the condo went from “current resident” to “other” … A strange way to talk about his death…

Apparently, a lot of visitors and buyers are scrambling to read the ad dedicated to the building and, perhaps, attempting to buy one of the two apartments. However, it’s better to have a wealthy bank account: the prices are astronomical! The first apartment, with 4,060 ft², is offered at $ 11 million and the second, a 2,890 ft² penthouse on the top floor, reached $ 11.7 million.
Both apartments feature a contemporary and cozy decor. The loft also offers a superb view of the Financial District and the One World Trade Center tower. One more thing to know if you are interested : the fashion designer Ralph Lauren spent a few years here and another celebrity still lives in the building, singer Courtney Love, widow of Kurt Cobain, the former leader of Nirvana. It should be very difficult to negotiate the price. 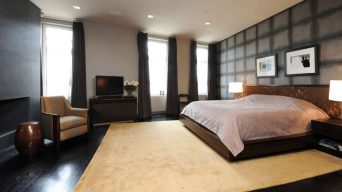 The bedroom at 285 Lafayette Street. 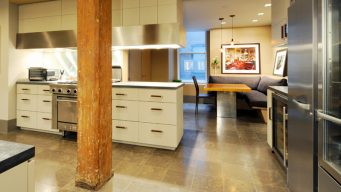 The kitchen at 285 Lafayette Street.